"I have loads of time!" squealed the over-confident crocheter, blissfully unaware of her inability to make time fluid, and force it to flow in the opposite direction. "Sure, I'm fast!", she added, equally ignorant to the fact that her fingers and wrists may have something to say about that down the line...

And now, the continuation:

So, I've been crocheting like a fiend, and I'm doing quite well. As this crappy photo proves; before panic started to set in, I was at Point 1; two days ago, I had all but reached Point 2; and thanks for last night's Fibre Fun Friday, I have reached the end, wherein all the bits have been connected.

You may notice the conspicuous addition of orange on one side. Let me explain before you judge me as tasteless in the ways of soft furnishings, your honour:

I have almost run out of white cotton, a white cotton for which I am most certainly guilty of losing the band (but really, high judge of the supreme court of taste and decency, after 7 or 8 years, who among us wouldn't have lost it?), and am pretty sure no matte, cotton thread of a similar weight exists in Ireland anymore, so I had two choices; Use a similar weight white thread, that's shiny, making it look exactly like the mistake I admit I had made, or use a different colour and make it look intentional.

And, I mean, really, would you have done differently, under the circumstances?

So, here I am. I have two of the bigger motives, and three of the smaller ones left to do. Once they're safely in their new homes, I'll be tacking the edging onto some nice tablecloth material. Thereafter, any time I may (hah! funny) have left, will be used to add an edging to the whole shebang. The edging will necessarily be in the orange, thus tying all the orange motives together in one, long, solid-colour band.

This... I hope... will look spectacular.

Please bear (sic) with me while I tinker around with my blog's format.
I'm just moving the furniture around.
No comments:

As I have previously mentioned, I come from a big family. Big.
As I may also have mentioned in the past, I'm no longer working for the man, but for myself, freelance, as a graphic and clothes designer, with all the taxes and bills and headaches to go with it. This has left me, well... strapped.

With a family this large, and the large family being rather close-knit, it seemed inevitable that at some stage, a family member would get engaged and I would happily accept the invitation to the wedding, because, as previously mentioned, my family is close. Cousins are brothers and sisters we just don't see that often, but when we do: whooo. It's great fun!

With this thought firmly entrenched in the mind, I have the pleasure to announce that way back, near the start of the year, I was told that my beautiful American cousin, Heather was engaged, and that the wedding was planned for the autumn. In New York. With all the family in attendance.

"Great!" the little voice in my head goes. "An Irish wedding in New York! This is going to kick-ass!" I started figuring out what to wear, what to get the happy couple, how I could ensure I could afford the flights, and then it struck me; that wave of fresh, new inspiration that comes to us crafters. "I'm going to make them their wedding present!"

"I have ages", I mused. Months and months to plan, prepare, crochet something timeless, something beautiful, original, and made just for them. It had to be useful, and not-too-fussy. My family, in general, don't go in for flounce. But, it had to be Irish, and it had to speak to me. I set about making plans to put together a simple Irish Crochet Lace motif, to edge a small table cloth. And the best bit of all, I had enough crochet cotton to wrap around the world several times over, and probably to take in the moon, too. I'd had it for years and years. It wasn't shiny or hard, and would make a beautiful addition to any new home.

And so, in earnest, I began to make little daisies with five dainty little petals, linking them petal-to-petal as I went until I had a short, garland-type thing going on. "This is great", I mused, feeling very smug.

Our Time Has Come!

I'm delighted, thrilled, ecstatic, and yes, chilled to the bone.

Autumn, ladies and gentlemen of the fibre persuasion. Autumn. The season we've all been working towards for the past six months or so. Finally, all our hard graft, all those hours squinting at needles, hooks, spindles will pay off. Now, at last, we can be truly, un-equivocally... smug.

Our feet will stay warm, our necks will not suffer stiff breezes, our ears will not be numbed by biting chills, our fingers will remain rozy no matter how long we wait for the bus on a crisp morning, clutching a half-demolished umbrella against the worst Ireland can throw at us!

Now, is the time to truly show off our skills.
Now, we are kings!
1 comment:

I took a few days off from working as a graphic designer, recently, to relax and enjoy the end of the summer. In the evenings, I decided to take up my lace-weight hooks again, and create a traditional teddy bear, miniature.

First his body was made, then his head. I added his nose and smile, and I knew I had a special little guys on my hands. I had christened him Patrick before he even had ears, because, let's face it, an Irish bear couldn't really be called anything else! He's a full 13cms tall, making him teeny tiny, and dead fast to crochet for those last-minute gifts we all forget about on occasion!

His pattern is easy to follow, comes with full assembly instructions, and is available here and here.

So, Friday saw the inaugural meet-up of the Friday Fibre Fun group, in the Tea Garden on Ormond Quay in Dublin, and I was delighted with the turnout.

Most of the evening was spent discussing this book, that Deirdre kindly brought along.

The cover alone is enough to make any modern knitter wince, but it just got worse and worse the more pages we turned. I can only imagine that these were fashoinable at some stage, but I have to thank the powers that be that I never spent the time, nor begged anyone to spend the time making these for me.

I have never been so glad to have been unfashionable in the 80's!

We have decided to run another meet-up on Friday week, that's the 16th of October, again at half six.

We hope to see you there for fancy tea and yummy fibre!
No comments:

It seems there are some things in the world that fall into the category of "too much fun, so we have to make it a teeny bit frustrating". Chocolate adds weight, in sunny weather we have to cover up, Christmas is expensive... and crochet doesn't use universal stitch names.

I know, I know. It's the US v's UK thing again.
It is "color" or "colour"?
Should we drive on the right side of the road, or the left?
Is it a double crochet, or a single crochet stitch?

It's enough to drive anyone to chocolate at times!

So, I have compiled a quick guide, below for those of us who can't translate these things in our sleep. Save it, print it out (I've made it A6, so it'll fit easily inside most pattern books out there for quick reference)

As for who's right? I have no idea. I have tried to get an answer, but no-one seems to know. As for me? I learnt to crochet from a library book that used UK terms, and after 15 years, I have started teaching using UK terms. Part of me thinks I refuse to us US terms in free patterns because I'm rooting for the underdog.

In a world of US-lead fibre revolutions, at the very cusp of which are books like Stitch N Bitch, The Happy Hooker, there are more and more people coming to crochet all over the world who are only going to be familiar with the US names. I guess it's just in my natuure to try and preserve what will likely be lost sooner or later, but still, when I teach someone who is new to the craft, using UK terms, but make them aware of US ones, I can't help but feel I'm holding that tide back a tiny bit.
5 comments: 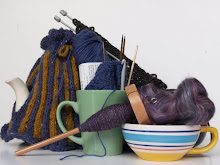 The next Fibre Fun Friday will be on 28th of May from 6.30 onwards. It's Yarn Swap Night!